Is the conjunction this year a bigger deal? At the same time of the Sun-Neptune alignment, Psyche and the north node conjoin in Gemini. The dream state intends to offer mental morsels and tantalizing tidbits as to what fantasies truly exist within ones nature and yearn to be fulfilled in that big, real world out there.


Next year’s Sun Neptune conjunction will be even more significant than the usual escapade into the fascinating Piscean ethers. It precedes Jupiter’s alignment with Neptune in April 2022. This portends a time in which massive innovation, inspiration and human evolution can be unveiled and comprehended. Efforts to manifest etheric renderings can be sustained with passion and purpose and promise of pursuit and fulfilment.


How about a visual? This photograph is what’s known as Neptune’s Grotto on the Island of Sardinia. You can Google for more images if you like, and I recommend doing so. These pictures are the kind of thing you can fall inside and free your imagination to see anything... even the unknown. They spin your top so it points at all sorts of galactic axes, rendering new perspectives of presumably more profound promise. Consider the organic irony that this grotto’s stalactites and stalagmites are the result of unending dripping and the subsequent growth that erosion leaves in its wake. Brilliantly boggling! 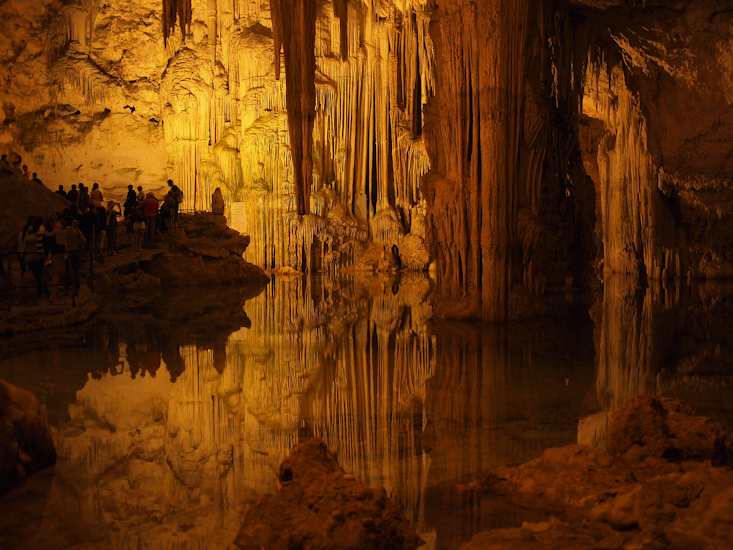 Jupiter and Neptune share the commonality of rulership, or technically, co-rulership over the sign of Pisces. Several weaves of wondrous concepts occur simply by virtue of the co-rulership. Could there exist a more profound portal of cosmic inspiration on Earth? Is there a better time to bring Heaven to Earth? Unlikely.


An integration between religion (Jupiter’s rulership of Sagittarius) and spirituality (Jupiter and Neptune’s co-rulership over Pisces) with tolerance and understanding, naturally occurs. This could be so profound that it is realized that reverence for the divine results in inspiration, compassion, understanding, and phenomenal empathy and cooperation shared by all who seek. It is indeed an opening for the unification and peace on Earth.


On a more personal level, Jupiter and Neptune together in Pisces represent an integration of personal freedom and confinement, whether self-imposed or otherwise. Within this pattern, one can permit patterns of sensing restriction and limitation that result in concerns of persecution, feeling misunderstood or suppressed by others and unknown forces. When the worry of such perceptions evaporates, the ability to stretch ones gills to swim as freely as one can in the oceanic depths of consciousness is the gift.


This pattern some thirteen plus months away represents an explosion of extravagant imagination and inspiration. However, the explosion is likely to result from concentrated dedication and a huge commitment of conscious attention applied in the now.


Today Venus enters Pisces, joining the Sun and Neptune. Take time to consciously value inspiration, creativity, the belief in magic, the power of intention and the unlimited potential of imagination. Savor the amazing sensation that accompanies a grand idea... an idea so grand the Sun shines brighter and both Jupiter and Neptune are pleased, appeased and impressed. Savor the passionate surge felt within when inspiration and imagination surge and the body and soul ache for manifestation!


Approximately a fortnight from now, the Sun aligns with Neptune and the time to make inspiration known will be at hand. Before you know it (13 March) Venus reaches Neptune. The value of what one dared to present comes into focus. Knee-jerk, fear-based reactions dissolve and musing on the merit of what is on the table freely fills the consciousness of all at the table. Following that conjunction (16 March), quicksilver smooth talking Mercury drifts into Pisces. Take time to polish all necessary communication. Work to erase any “slick” or sneaky sounding terms from what requires articulation, and be impeccably clear. When agreement is reached, stop talking. Conduct an energy meld with all involved in the confluence for super conductive grounding of the inspiration in play.


The Pisces pattern this year culminates as Venus and the Sun flirt their proximity in the last degrees of the sign, signaling the need to wrap up details of securing resources such that at the equinox, both the Sun and Venus feel fortified to put ample spring in their step.


The seeds of inspiration and ideas realized in this time grow in the consciousness of the spirits and souls mesmerized by boundless inspiration and actively applied inspiration. This is the start of a blast of healing revelations that potentially covers the Earth come April of 2022. The profundity of these feelings works as salve for all psychic woes. The inspiration hovers above for all to grasp. Those who engage... well, all bets are off!


Realizing the next weeks set up what culminates in some 13 months, there’s no time like now to solidify a plan for getting down with your perceived magnificent manifestations. Using the links below you can set up consultations, order reports or ask questions or dive into the most groovy Galactic Trilogy CD! Time to click!

Note: All donations to this site are reported as income for tax purposes.